߷ This article is about Hobart’s characters, who live in Vekllei 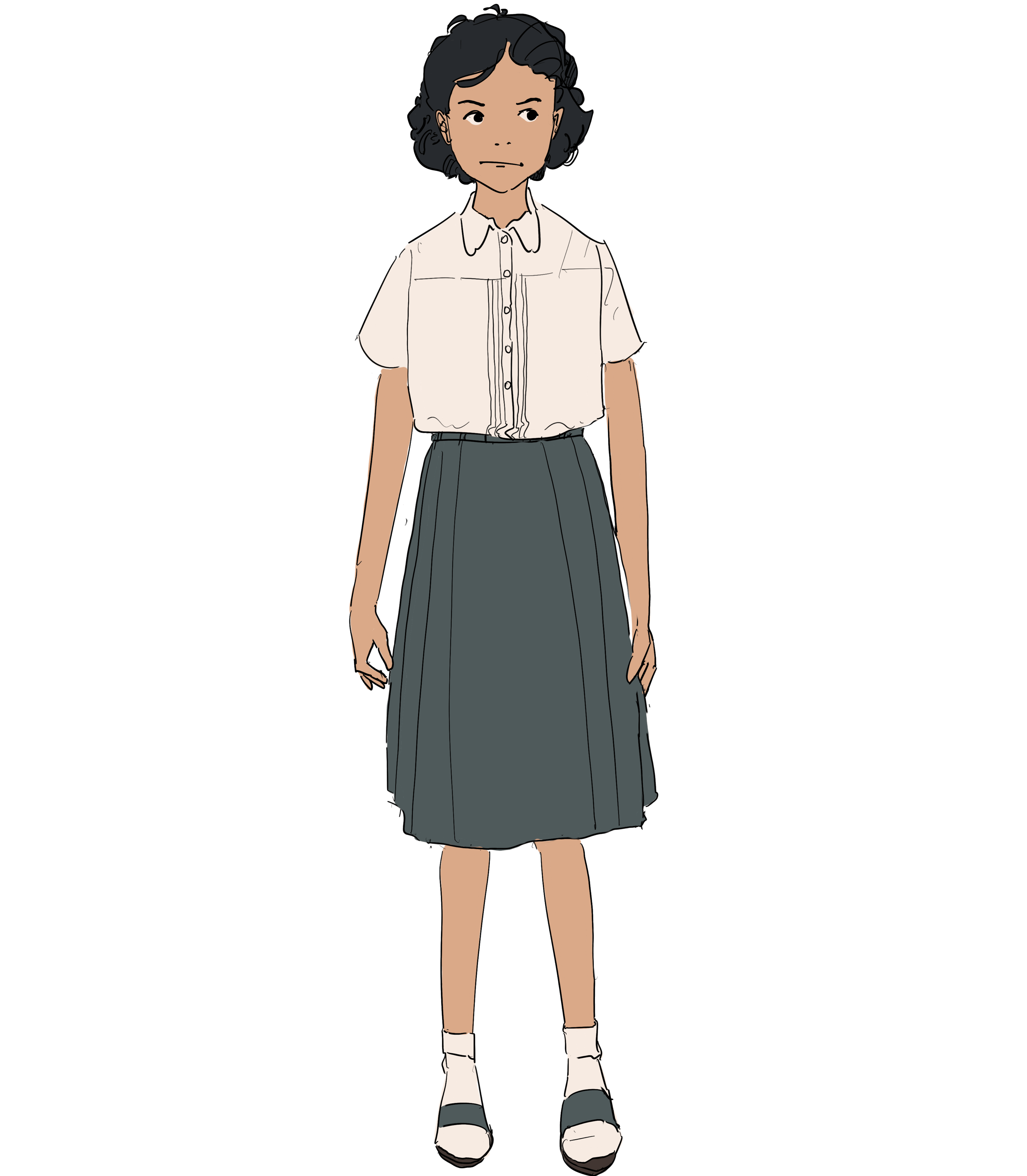 Tzipora lo Ula de Helette Desmoisnes, often called Zelda by her friends, is the main character of this project. Although born in Vekllei, Tzipora was raised overseas in Colombia and later educated in the United States. Since her arrival in Vekllei, she has formed sincere and long-lasting relationships in her homeland, stabilising the neurotic parts of her personality and blessing her new life with companionship.

Tzipora is blue-eyed and black-haired of mixed Eastern European Jewish and Spanish Romani heritage. She has a round head and a big smile, and is naturally athletic. She parts her short hair in the centre and ornaments it with fountain hairpieces, traditional hair loops and floral assemblies depending on the occasion. She is a victim of Gregori-Heitzfeld Disease, which affects her quality of life and contributes to her isolation from other people.

She dresses in conservative fashions and has maintained a consistent taste throughout her life. She has a preference for loose-fitting clothing, particularly buttoned shirts, slacks and skirts of various styles. She is most commonly seen in a pleated white shirt, modest skirt, folded socks and penny loafers or sandals.

Tzipora is nonconformist by way of ignorance or obstinance depending on the occasion.

She is paranoid and conservative, good-natured and austere, with a moral outlook bound by her deepest anxieties and obsessions. She is deeply spiritual and material, fascinated with objects and their history. She has many collections of many things she’s found. She’ll likely die a Catholic, but has a confrontational relationship with God and no longer attends mass. She has Jewish ancestry and struggles to reconcile the fractured parts of her family history.

Tzipora may be intense and inward-facing, but she can also be disarmingly charming and self-deprecating. She has a good sense of humour. There are not many girls that can so easily reconcile the contradictions between the peculiar and the healthy, the eccentric and the friendly, and the violent and the domestic. That’s part of her character — an essence of being that radiates decency, good taste and a respect for the spirit of all things. 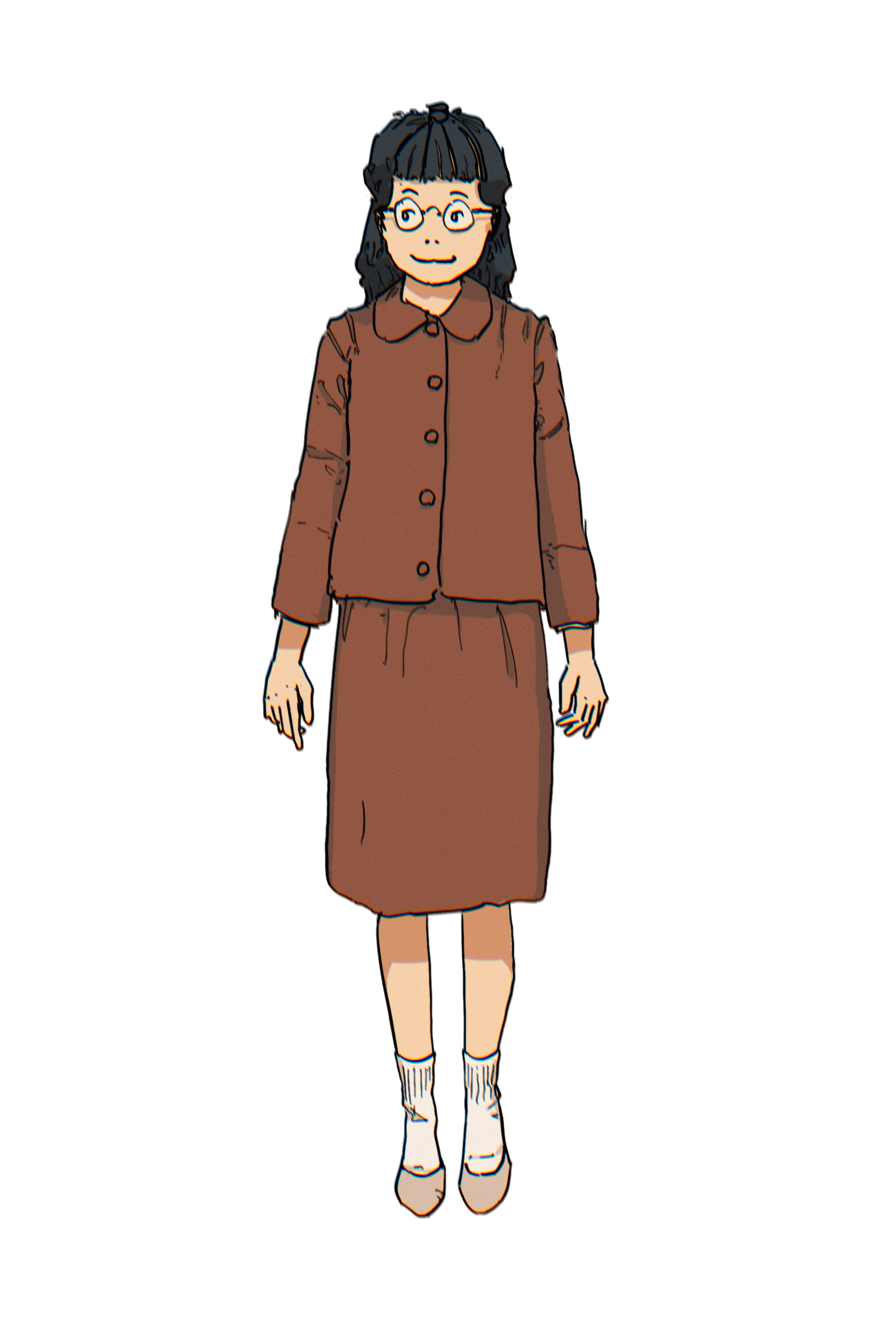 Cobian lo Ro de Viviya de Queismesnah is Tzipora’s longtime friend and occasional girlfriend. Conservative in manner and appearance, Cobian is easily remembered by her circular spectacles and stern fringe, styles maintained since childhood. Tzipora and Cobian met during secondary schooling in Vekllei, and remained close throughout the rest of their lives. She is very close with Tzipora, but has tepid relationships with Tzipora’s (mostly male) friendship group out of jealousy and a general distaste for boys. She is rigorously polite in the middle-class sense of the word; formal among strangers, gossipy among friends.

Cobian is green-eyed and black-haired, descended mostly from Inuit-Scandinavian ethnic groups common in Vekllei. She is more Asiatic in appearance than her friend Zelda, and is tall for her age. She styles her long hair in many different ways, most commonly in a bun or braids. She is healthy but inactive, and tans easily without freckling. Cobian is naturally graceful and well-mannered, traits Tzipora is deeply envious of.

She dresses in prim, well-maintained clothing courtesy of her despotically hygienic mother, and has a penchant for ironed shirts, pleatless skirts, cute hats, synthetic hosiery and jewellery she considers befitting a maturing young woman.

When Tzipora meets her, Cobian is a figure of sympathy and irritation. She was deeply insecure after old friendships fell apart in the tumultuous transition between middle and secondary schooling. Once she became comfortable around her new friend and matured out of some old insecurities, Cobian revealed herself to be easy-going and friendly, a person of small pretensions and genuine friendship. In her own skin, she makes an excellent conversationalist, charmingly attentive and ready to listen.

Some people think she’s pretentious; she’s not pretentious. She likes good food and is highly fashionable in her interests and styles, but Cobian is also deeply empathetic and finds interest in new things via her friends she’d never previously thought about. She makes up most of Tzipora’s social life, which leaves plenty of space for Zelda’s big personality and obsessions. Zelda has a deeply stablising effect on Cobian, rounding out some of her mother’s strict legacy through Zelda’s androgynous habits and far-fetched fascinations. But Zelda’s big personality does not include much talking or grace, and in these deficiencies Cobian’s social talent shines. Together they make a great pair, their neighbouring personalities aiding their best selves.

Moise ra Hasapis is Tzipora’s neighbour and best friend. Like Tzipora, he was born overseas and has only started schooling in Vekllei in late childhood. Imposing in both attitude and posture, Moise is feared and respected among his peers, an unfortunate social situation that enables his renowned temper. An agitator and victim of his troubles, Moise is tempered by Tzipora’s inwardness and Coretti’s good-naturedness. He lives with his sister and father in Seispri, and deeply despises his mother, who remains in Greece.

Moise is brown-eyed and dark-haired, with powerful Greek features inherited from his parents. Well-built and heavy-set, Moise is overweight when he meets Tzipora, and loses some of it through her help in exercise.

He is not particularly interested in his own appearance, but by habit or luck is characterised by a wardrobe of shorts, slacks, bright shirts and tennis shoes. In summer, he usually wears Hawaiian shirts, a fact Tzipora finds funny.

Moise is hot-headed and sensitive, traits that leave him feeling cornered by the world. It is precisely this cycle of passion and anxiety that endears him to Tzipora, who recognises his feelings in herself. Tzipora is dependent on his male perspective and relative straightforwardness, compared to Cobian’s more intricate and unspoken social rituals – the distinction between true mateship and true love, she supposes. Moise, for his part, admires Tzipora’s sincerity and plainspokenness.

He dislikes his parents and is protective over his younger sister, Penelope. He has some interest in making films, since he is not particularly academic and doesn’t want to leave his sister for the army. He is uncomfortable with sharing his emotions, which upsets his girlfriend Coretti. Tzipora’s social intimacy with him is largely due to their similar shyness of emotion and stubborn independence, which counterintuitively binds them closely. 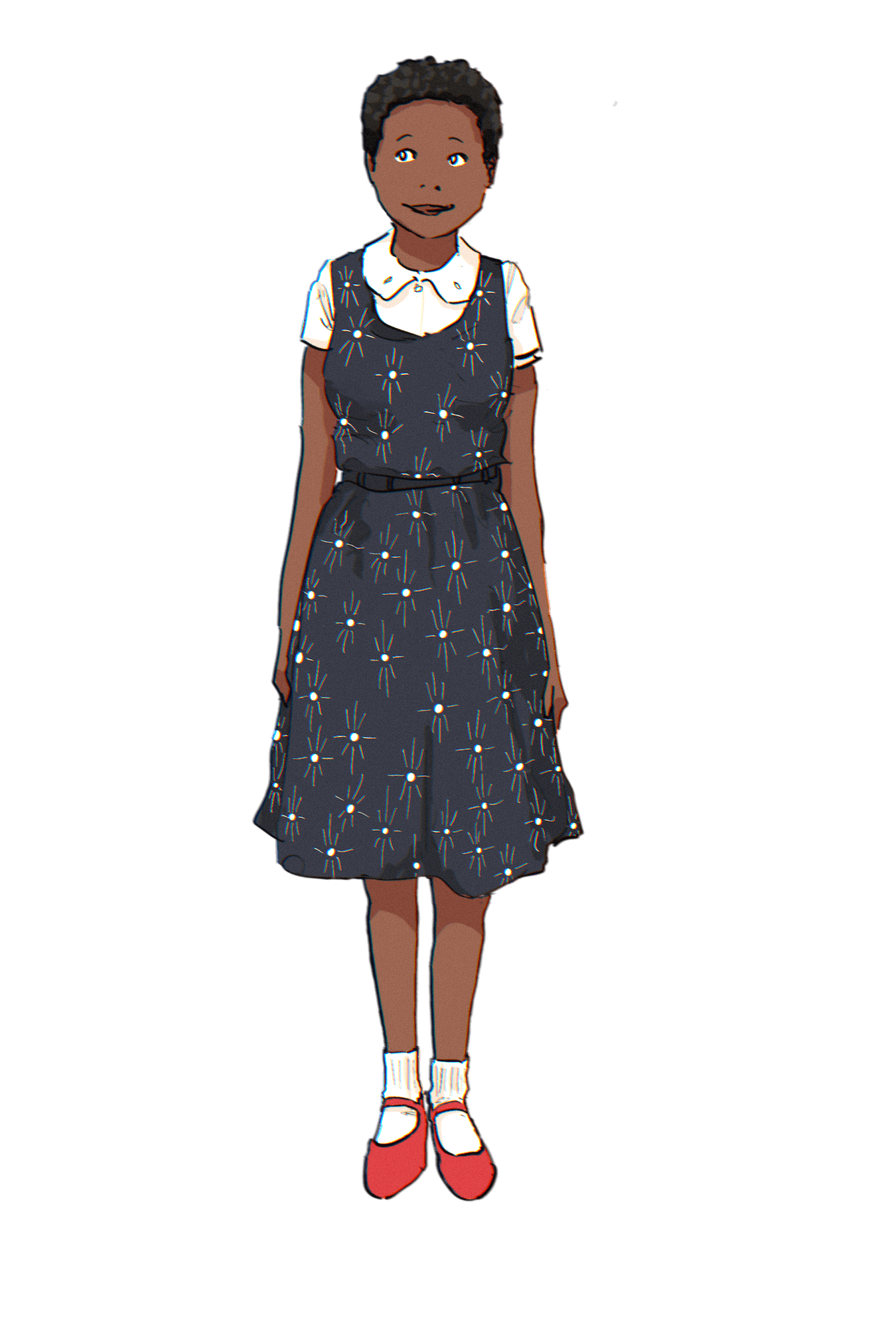 Coretti lo Rus de Gloria Adoula is Moise’s girlfriend. Born in the Congo, she lived in Russia before moving to Vekllei at 6 years old, and speaks Vekllei fluently. She is sensitive and diplomatic, and is well-liked for her impartiality. As her relationship with Moise develops, so too does she grow closer with Tzipora and her friends. Although her relative maturity can distance her on occasion, her unprejudiced curiosity and social grace are traits Tzipora loves, and they bond closely over their shared taste in art and music.

Coretti is Vekllei-Congolese with dark skin and natural, short hair. She is slim, authentically pretty and graceful – and has many admirers for it.

She is not particularly fashionable and does not need to be. This modesty enhances her natural charisma. Like Tzipora, she has some affection for Nuova Grotessco styles and unpretentious blouses and pinafores. She likes patterned clothing and owns many types, which she rotates regularly – perhaps her only eccentricity.

Coretti’s gentle good-naturedness leaves powerful impressions on all her meet her. She is the oldest of four sisters, and she applies these learned maternal qualities on her boyfriend’s volatile friends, who are deeply passionate and opinionated. Her goodness does not preclude her from her own pleasures – she adores music and good food, and unlike Lin Zhi, is more than willing to share the culture of her home country with her friends. She loves when gestures are reciprocated – among her favourite memories is Tzipora showing her how to cook her childhood Colombian staples.

Despite her apparent differences in temperament with her boyfriend Moise, Coretti spends more time around vibrant hotheads than she does placid appeasers. Perhaps this is a behaviour legacy of growing up in a large, loud family. Maybe she is just attracted to big personalities. Either way, they appreciate her for it – her voice of reason brings them all closer together. 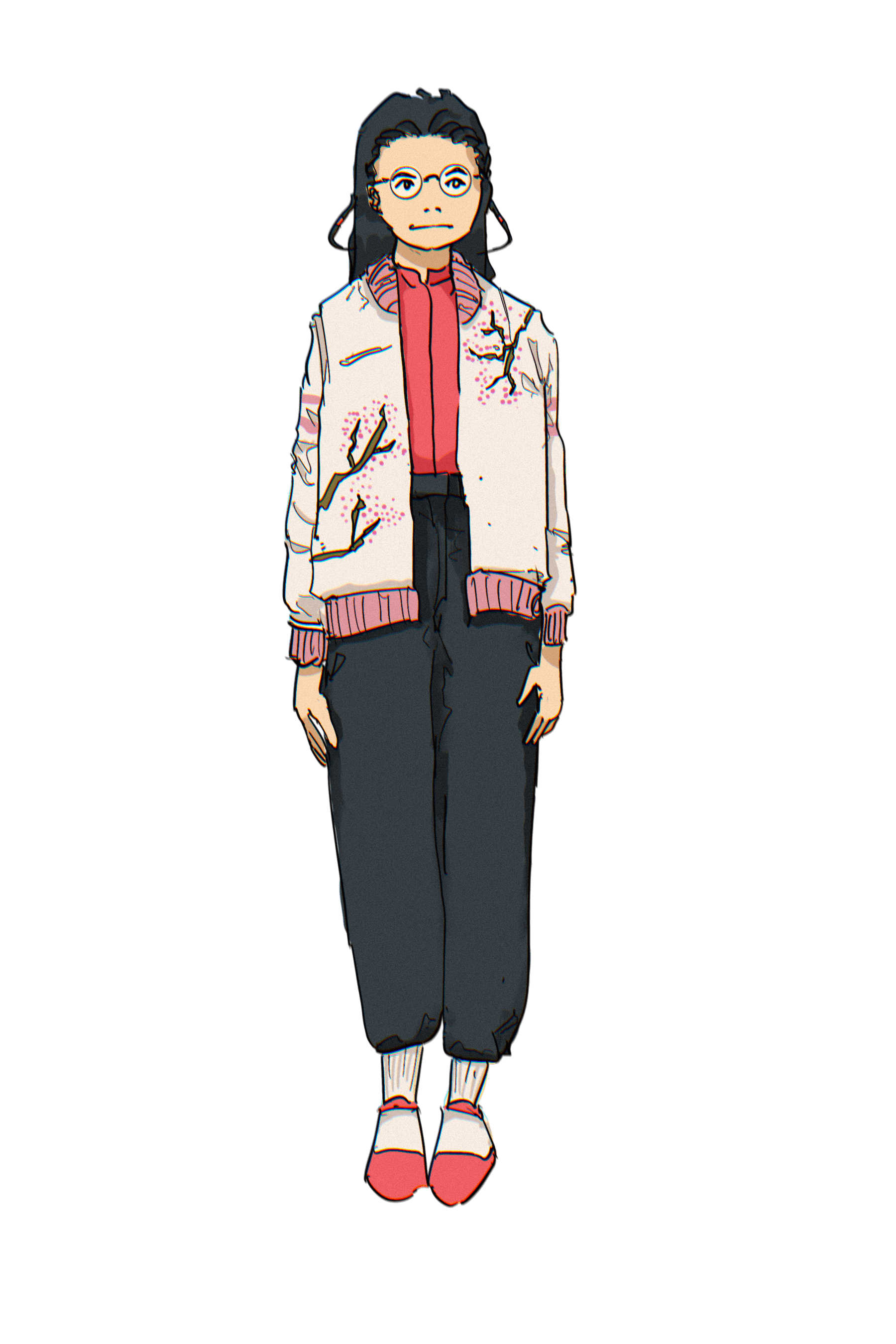 Lin Zhi, who prefers being addressed by her full name, is Tzipora’s friend and occasional accomplice. She is the perfect ally of Tzipora, indulging her most passionate (and self-destructive) instincts, and they remain good friends all their lives. Like Tzipora, Zhi is a recent immigrant and terrified of life in Vekllei, from which she has retreated into traditionally Chinese cultural signals and behaviours. Tzipora is fascinated and deeply curious about her. Cobian and Coretti fear her.

Lin Zhi is Chinese and has lived in Vekllei since she was 15. She has a serious face and round spectacles like Cobian, and brushes her long dark hair back. She maintains two unusual hair loops below her ears in braids, a style she has apparently invented herself.

Lin Zhi resents the burden of integration and demonstrates her foreignness through foreign styles, usually with traditional Chinese items or more contemporary Maoist fare. She wears loose Ku-style pants at home and school, which bear close similarity to Vekllei indigenous rouisha trousers, usually with Vekllei or Chinese strap slippers. She has a weakness for jackets and cardigans, and never leaves her arms uncovered.

Lin Zhi is a girl under siege.

Tzipora first bonds with her over their social isolation as recent immigrants. Like Tzipora, Zhi speaks poor Vekllei and is deeply resentful of having to relocate to a foreign country. These poor language skills and deep anger are evident in her short, sharp speaking style and stern appearance.

She is sensitive to being made fun of, and considers many of her problems making friends to be racial in nature. Despite these emotional burdens, or perhaps because of them, Zhi is deeply loyal to her allies as long as they respect her social boundaries. Zhi is never the engine of conversation – she’s just happy to be there.