The Royal Mail of Vekllei 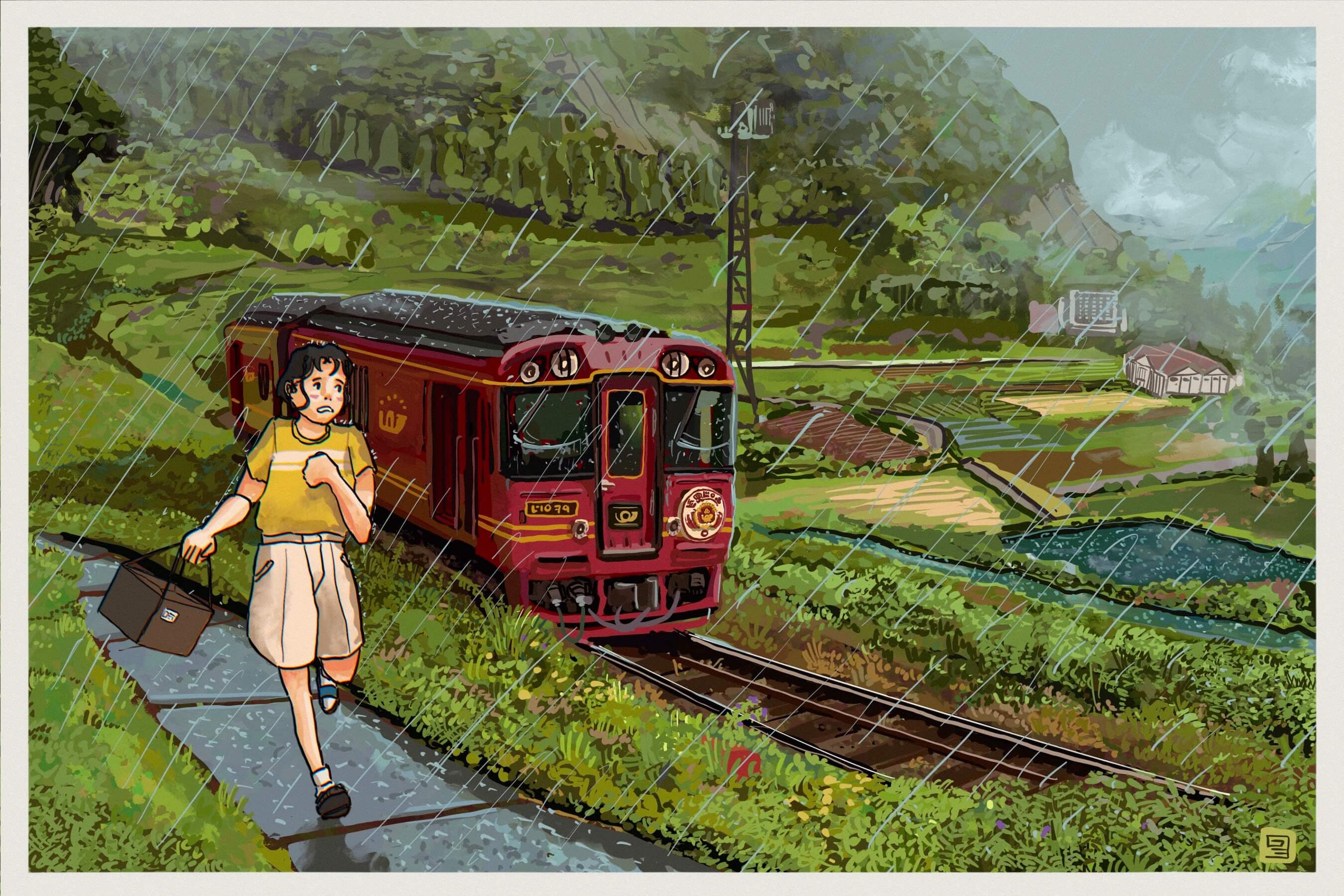 The Royal Mail of Vekllei is perhaps the country’s most visible organisation overseas. For many foreigners, Royal Mail aircraft may be the closest they ever come to seeing for themselves the mysterious Atlantic country. For Vekllei residents, the ancient organisation is a living relic of the country’s ancient history, and an ongoing testament to the longevity of their people.

T he Royal Mail of Vekllei, referred to as the Mail or Mail A.r.1 within the country, is the national postal carrier of Vekllei. It is a military state requisite reponsible for all postage in the country, and delivers nearly 50 million mail pieces domestically and abroad each day. One of the oldest institutions of its kind in Vekllei, it was founded in 1422 as a courier system between the Vekllei Kingdom and its largely mercenary military force. In 1742, it was formalised as a modern postal system available to the civilian public, and today offers a variety of services available to all Vekllei residents, including external territories.

Vekllei is also home to the U.N. Universal Postal Union, the body responsible for coordinating international postage, of which Vekllei is a signatory.

The Mail is old enough to have its own hieroglyph in Topet, which has resulted in the somewhat misleading transliteration of its name. In Vekllei, it is simply called the ‘Mail’, since its written name includes both its royal and national meanings intrinsically. Abroad, this is usually translated as the Royal Mail of Vekllei, but this is in fact more of a description of the organisation than its proper name.

Since Vekllei refers to its territory as its sovereign (expressed commonly as the ‘Landscape Sovereign’), the Mail remains Royal even today, centuries after the collapse of the monarchy that founded it. Despite its regular function as a postal service, it is nonetheless considered a resource of landscape, not a government department, and so it remains “the Royal Mail of Vekllei” in the 21st Century. An MS Model 54-2 “Fairie,” used to deliver mail to Vekllei’s islands and islets | The Fairie

Like most Royal Bureaus, the Mail is headquartered in Vekllei’s capital across a dozen or so city blocks dedicated to administration, manufacturing, vehicle storage and maintenance, and Vekllei’s General Post Office. There are over 6,400 post offices in Vekllei today, connecting the dense Home Islands to its far-flung peripheral territories.

❖ Read more: The Men and Women of the Royal Mail in Vekllei

Although Vekllei has maintained courier systems for at least a thousand years, the Mail as a contiguous instituion was founded in 1422 by the Desimou VII, King of Vekllei, in the late Period of Rest. During this time, the lords of Vekllei had established significant mercantile holdings across the North Atlantic, and had developed reliable systems of trade throughout Ireland and Denmark. The Royal Mail of Vekllei was first established as a royal communications organ that sought to ensure stability of the Desimou rule across the incresingly autonomous Vekllei empire. In this period, the Mail consisted of a handful of messengers attached to the feudal military apparatus of the Vekllei monarchy, which transferred to the incoming Junta upon collapse of the monarchy. The Mail would not come to resemble conventional civilian Mail until 1652, when the Junta expanded postal contracts to the privy councils of the Faroe and Greenland territories, and later broke apart the Mail monopoly to benefit then-Secretary of State Kism Sismiosnah, who established the New Parliament Postal Service. It was not until nearly a century later, in 1742, that company services were opened to all land-owning Vekllei people, and the Mail came to resemble its contemporary mandate.

The Mail was reestablished in 2015, during Vekllei independence. It was afforded a mandate protected by the postwar Petticoat Constitution, and all existing private mail services established in occupation were folded directly into the new state monopoly. In 2016, a year after reestablishment, Mi Miou was elected as the world’s first female Postmistress General. The Floral Period of the Royal Mail has been marked by a rapid expansion of both infrastructure and services in Vekllei and abroad. World Post, the international for-profit arm of the Mail, was established in 2034.

❖ Read more: The Postmistress of Vekllei

The Mail is organised horizontally as an independent branch of the Royal Vekllei Armed Forces, and so, unlike other State Requisites, reports directly to the Prime Ministers of the Vekllei Government, as representatives of the Landscape Sovereign. As is common with most large-scale industry in Vekllei, the Mail is vertically integrated, and the majority of its contract work is consolidated directly into the bureau structure.

The Mail has two offices of administration: the General Office and the Office of the Postmistress, which are responsible for daily operations and interdepartmental administration respectively. The following table outlines the Mail’s structure.

The Royal Mail maintains a constitutionally-bound monopoly on all postage in the country, leaving it the sole provider of universal postage service in Vekllei. Like most State Requisites (A.r.), however, it has substantial international trade and foreign dealings that provide for its common description as a state-owned for-profit enterprise, or public corporation.

Universal service is, by the glossary of the Mail, truly universal. As mandated by Vekllei law, the Mail provides delivery for all postage material anywhere in the world, or indeed, beyond it. It maintains 6,424 post offices across Vekllei, including its antarctic and peripheral possessions. The Mail’s first Lunar Post Office opened in 2059. In addition to its domestic monopoly, the Mail contributes nearly VK❦2.6 trillion each year towards the Vekllei Government Securities Bureau (the country’s sovereign wealth fund) through its international postage and courier services abroad, under the name World Post. 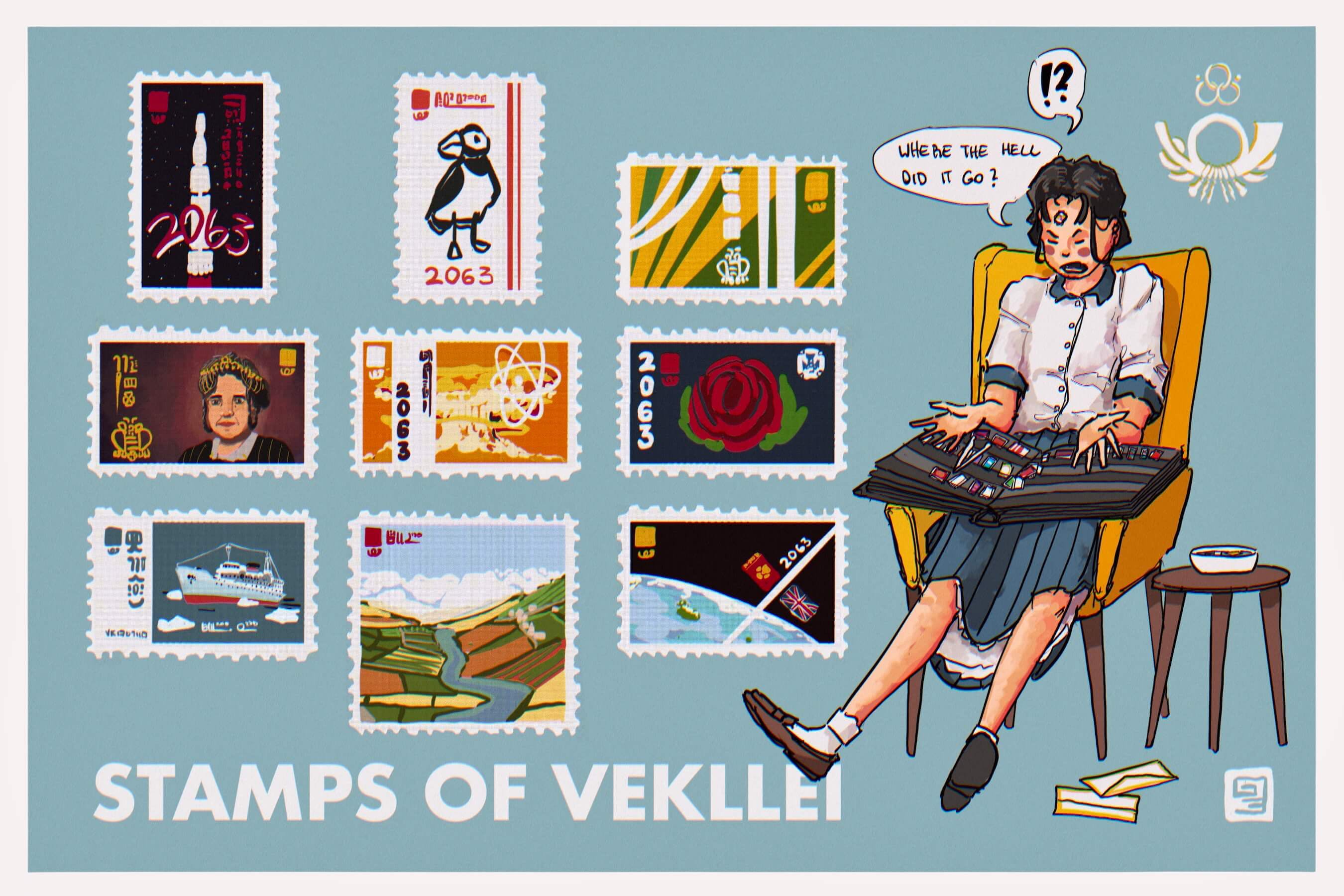 Tzipora arranges some of her favourite Vekllei stamps | Philately Foolery

Since the Mail’s Office of Telecommunications is also responsible for all telephones, telegrams and videophones in the country, the Mail’s status as a lynchpin of communication is absolute, and heavily protected by the postwar Vekllei constitution.

❖ Read more: Racing the Post Office to the Station

Although Vekllei people do not pay to post items, stamps are affixed with coloured squares called chromacodes which are used in the automatic sorting machines common in the country. International Mail uses traditional stamps with price listed, and the Vekllei Crown displayed. Franking is used for tracking and identification.

Special, commercial and industrial postage is managed within the Postal Service Bureau through special sorting facilities and a dedicated postal network. Regular business postage is funnelled through regular daily service, but hazardous, oversized and dangerous goods are accepted by special Post Offices designed to accept them. The Mail does not provide special services for regular residential or courier delivery.

The Labour Bank of Vekllei2 is easily accessible via the Mail’s Financial Services Bureau. Although inaccessible within the country, savings can be withdrawn conditionally upon emigration, and the Mail offers easy access and financial counselling for Vekllei people. Through the Financial Services Bureau, the Mail also offers financial management to immigrant populations with wealth transfer (the phrase for banking of savings and prior income) and Overseas Accounting, commonly used to send money to family abroad.

Cosma (a portmanteau of communicasia matismion) is Vekllei’s state communications company, responsible for all residential and public telephones in the country. This includes videophones, public phone booths, and residential networks. Cosma also maintains telecommunications infrastructure networks internationally through Cosma Overseas, primarily the Vekllei-Europe undersea cables and their sister sets between Vekllei and North America. Much of the network dates back over a hundred years, since a shortage of modern personal telephones in Vekllei requires Cosma to maintain a wide variety of voltage and cable standards. Commercial, industrial and government telecommunications is managed by a seperate internal department called the Industrial Telecommunications Office.

As a military organ, the Mail A.r. retains military ranks for its staff, commanded by a Postmaster General and aided by a civilian regulator designed to keep its critical service available to Vekllei people. The Mail’s fleet includes dedicated jets, automatic trucks, mail trains, intercity pneumatic systems, vehicle automen, and postmen, all wearing the red and gold colours of the organisation. In total, the Mail delivers nearly 50 million pieces of mail during weekdays.

It is evident that the services assigned to the Mail by the postwar constitution are of critical importance to the stability of Vekllei society. In addition to being one of the oldest active postal organisations in the world, the Royal Mail of Vekllei is tremendously busy, since physical post has scarcely been displaced by the telephone in the country. Even without the Mail’s international postage, domestic mail each day can exceed 12 million pieces – enough for 1 in 2 people, though commercial mail and periodicals are included. 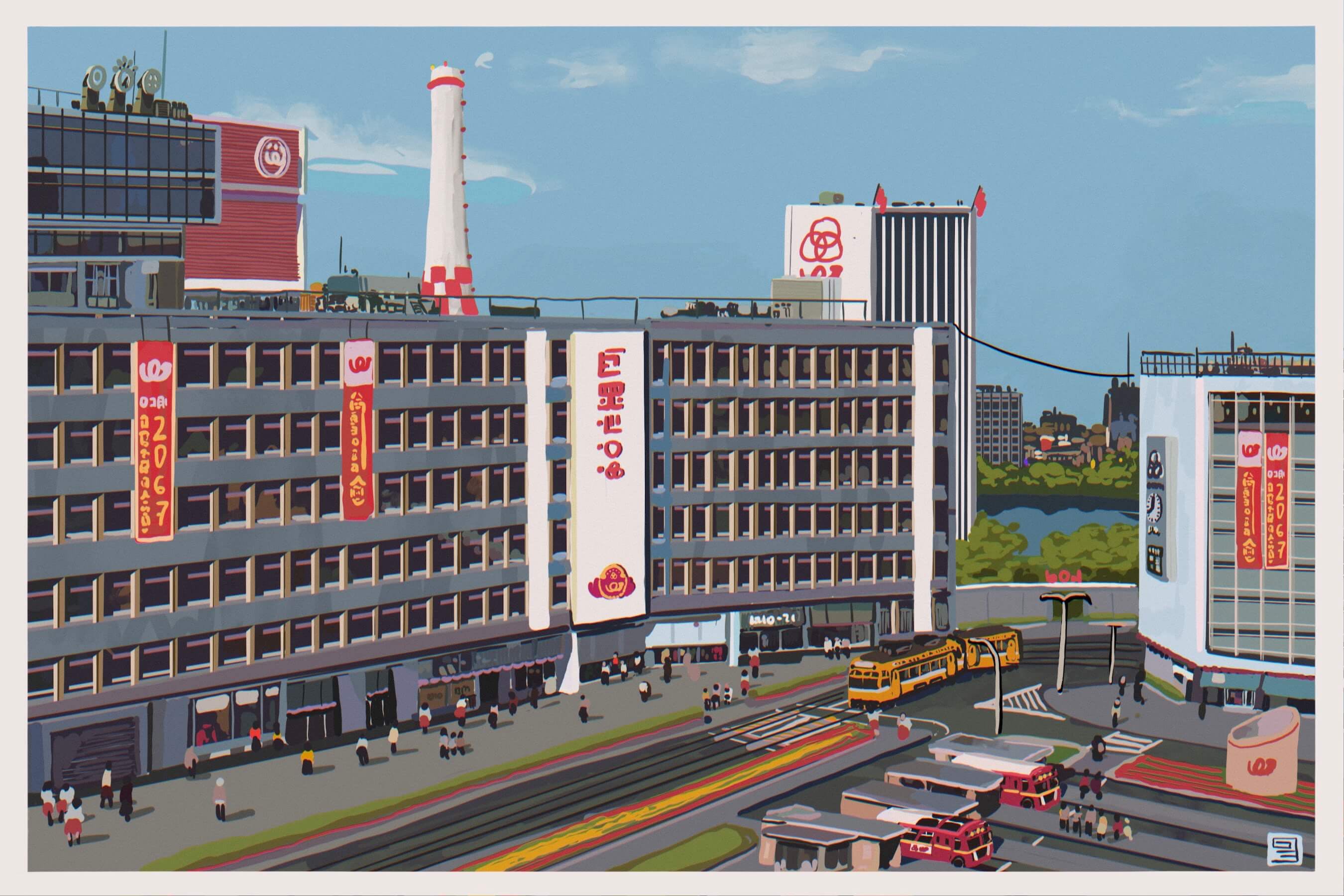 As is typical for critical bureaus in Vekllei, the Mail alleviates the stress of daily service through its dense, vertically-integrated infrastructure aided by automatic (automen vehicles) and permanent fixtures (pneumatic systems and automatic sorting/franking machines). It is precisely this commitment to infrastructure that makes the Mail so visible in daily life, and contributes to its ongoing legacy as Vekllei’s oldest running government institution. 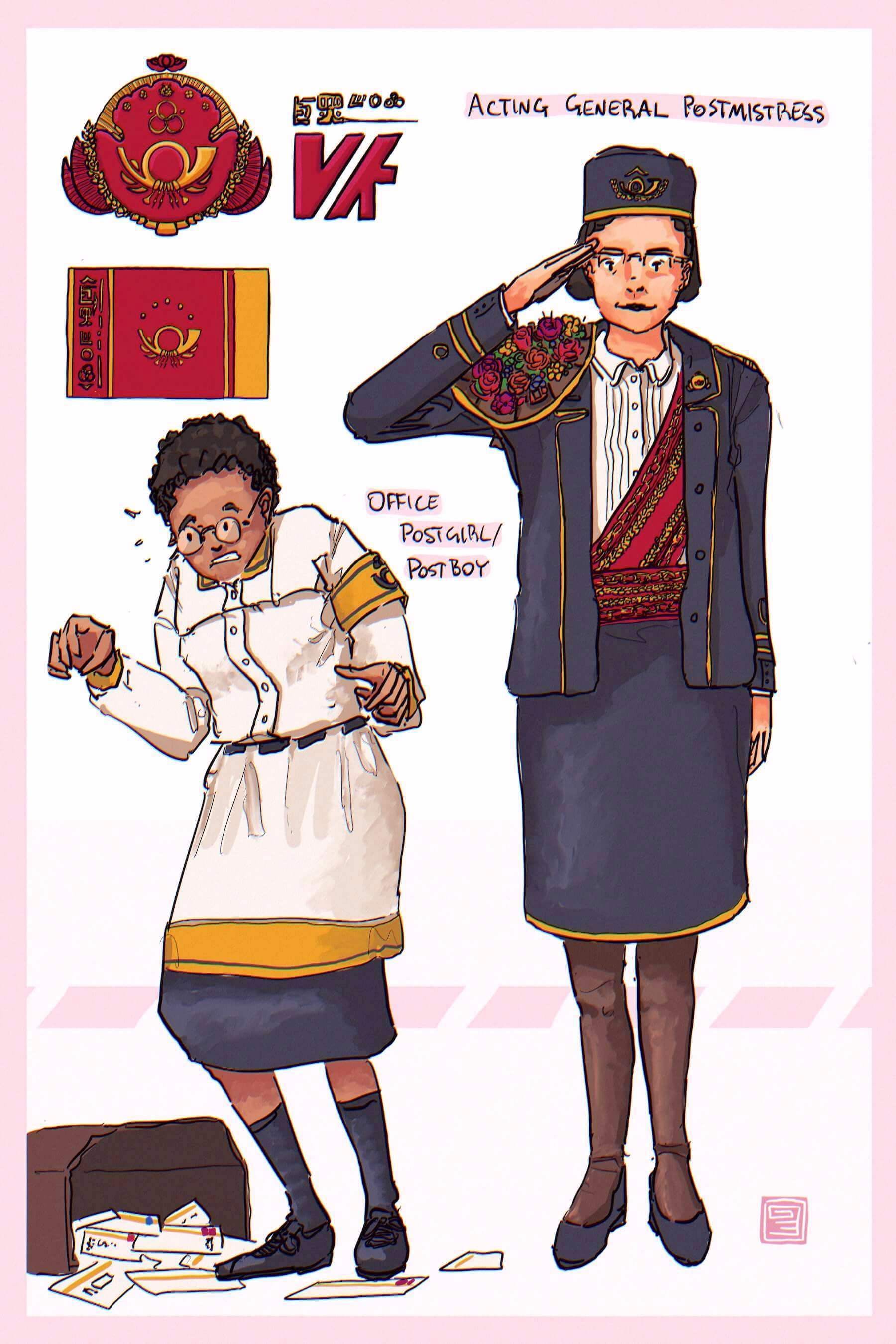 The Mail employs 48,960 people full-time across its various offices, and nearly 200,000 automen in various roles. Although the Mail does retain a staff of postmen and couriers, most urban daily service is now provided by automatic vehicles and sorting, which account for nearly half of the total automen owned by the organisation. Instead, the majority of Mail employees are involved in the running of the organisation – mostly as clerks, managers, and administrators. Around 10,000 postmen are employed by the Mail in daily delivery, called “posties”. There are around 8,000 postal routes in the country.

Although at first glance the number of automen dramatically exceeds demand, the total count is misleading – most automen with the Mail are integrated into the infrastructure of its sorting centres and post offices, and very few are traditionally autonomous robots commonly seen in public in Vekllei. Only about 8,000 automen are employed in physical mail delivery.

There are 16,220 post boxes in Vekllei, which are iconic for their red and gold paint and intricate detailing.

The Mail retains a large and diverse fleet of vehicles in regular operations, which, due to their diversity and and expense, have become iconic around the world. From bicycles to space planes, the Mail’s fleet of vehicles rivals in diversity postal services three times its size, largely benefitted by Vekllei’s obfuscated budgeting system and cultural importance afforded to the organisation.