Tzipora Takes her Lunch to School 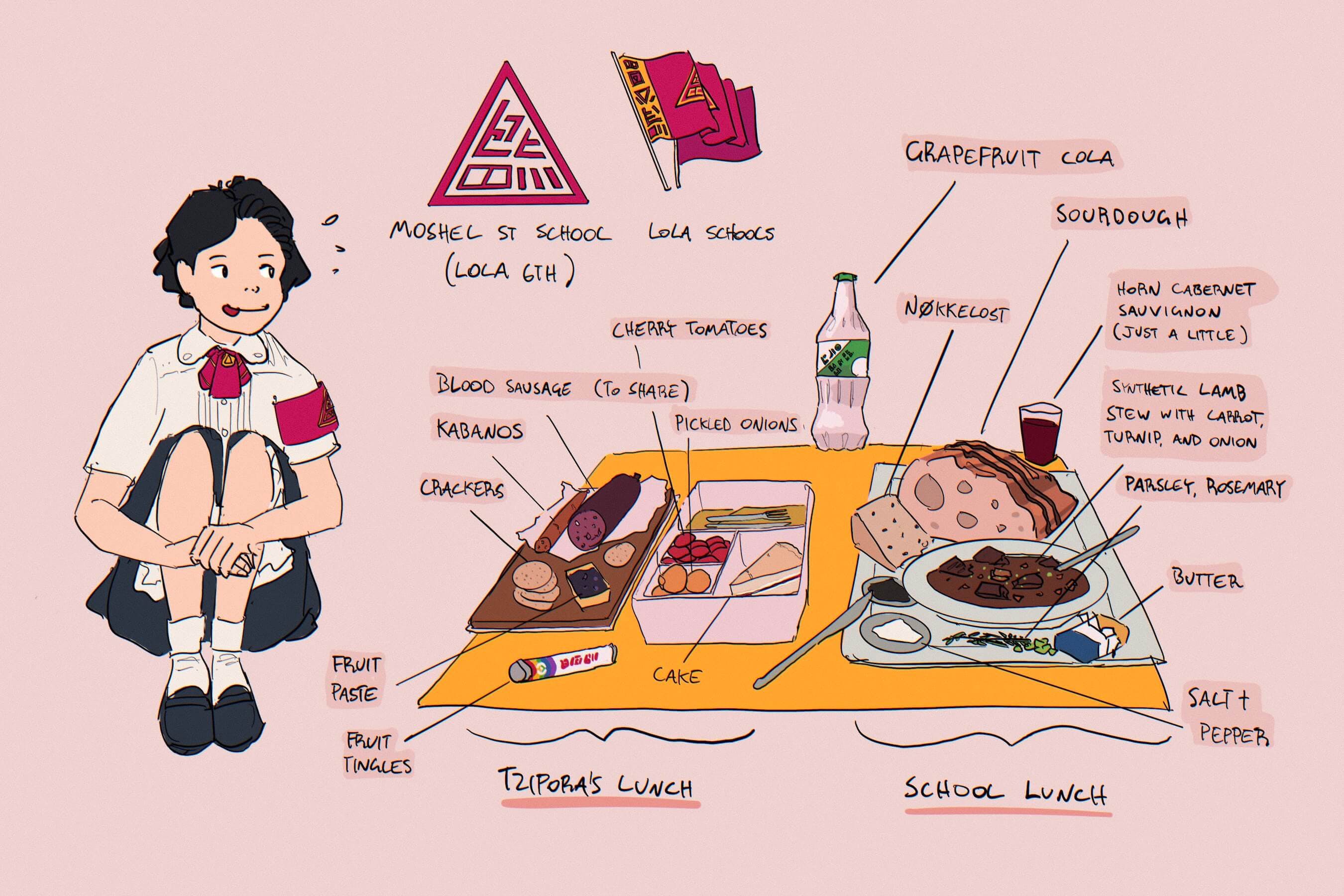 In Vekllei schools, they take an hour and a half for lunch most days. Food is a complicated subject here, as a ubiquitous demonstration of the Vekllei cultural tradition and its relative scarcity compared to consumer societies.

Food unable to be grown for the house is usually obtained from grocers. Those grocers put in orders for produce from agricultural companies or their representatives — usually ‘petty’ (informal) bureaus. Some of these are farms, but more commonly in cities they are greenhouses and hydroponics factories. Rather than manage the stock of individual staples and products, most grocers elect to enrol in automated inventory management through the Central Product Inventories (CPI) system, which are computerised and manage delivery automatically.

The problem with this system is that it is both very open-ended (it contains most commercially available foodstuffs in Vekllei) and very unreliable. Central Product Inventories have frequent backlogs for specialty products, particularly foreign foods, and so only staples are available regularly. As these delays cascade down to the consumer, they reveal a system that has no real intention of giving everyone what they want, all of the time.

Because of this, many Vekllei people in cities dine out most nights. In the context of schools, this means that the provision of hot, nutritious lunches for students was considered necessary. It is the only real way to guarantee the food intelligence and cooking ability of the postwar generation, who may not otherwise cook at home.

In some schools, parents and teachers help student volunteers cook. In others, like Tzipora’s Moshel St School, classrooms take turns cooking for the rest of the school. Depicted here is Tzipora’s packed lunch alongside an example of a lunch provided by the school.

If not eating leftovers, Tzipora likes things that she can eat with her fingers. Processed meats and sausages are readily available in Vekllei and replace cold cuts of meat most days. The heaviness of the blood sausage and kabanos is alleviated with some fruit paste and cherry tomatoes.

Pickled foods keep for a long time and so are a great way to fill out a packed lunch. Tzipora eats her pickled onions first, otherwise her breath smells like onion for the rest of the day.

Tzipora is also sweet on soft drinks, and rotates through different flavours to keep them interesting. The carbonation suits the crackers and sausage well.

She has fruit tingles, a chalky tablet sweet, for dessert. The cake isn’t for her; it’s to trade for other sweets. She’s eaten enough of it at home already.

Stews, sometimes called casseroles in Vekllei, are a staple of local cuisine and are an easy and tasty way to feed hundreds of students. They’re made out of ingredients of abundance — the sorts of root vegetables and lab meats churned out en masse by the inflexible hydroponics system of the country. Most schools also have gardens and produce all of of their own vegetables, in this case herbs, carrots, onions, potatoes, and tomatoes.

The stew is eaten with bread, which is often shared between friends. A portion of cheese is provided for dessert — today, a semi-hard Norwegian-style cheese (called Keysmi in Vekllei) with cloves and cumin.

Most government schools serve small portions of wine with meals, even to primary school students. Milk is an available substitute.

← Kicking the Habit, Pt. 1 of 12
All Chapels for All Women →
Archived from the original article here